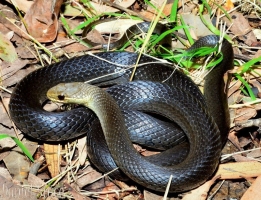 Bites from this species have been known to cause severe local symptoms such as pain & swelling, with more general reactions such as headaches and nausea also recorded. All bites should still be treated immediately and attended to with correct first aid.
General description:
Fairly uniform brown, olive or black above with dark grey or black belly surface. Two prominent narrow pale-yellowish stripes on each side of face, one running from snout, through eye and onto neck area, & one below eye running from snout to corner of mouth. In juveniles the head is often darker than the body. Scales smooth. Midbody scales at 17 rows.

Average Length:
50cm with occasional specimens nearing 70cm.
Habitat in SE Qld:
Rainforest & moist well-vegetated areas such as wet sclerophyll forest, margins of creeks, dams, wetlands & low-lying seasonally flooded areas.
General habits:
Diurnal, although may also be active at night in hot weather. Shelters under rocks, sheets of bark and thick debris.
Diet:
Small frogs and lizards.
Local distribution:
Found in wetter suburbs usually with riparian (river margin) habitats nearby such as Bells Park, Doonan, Tewantin and around Lake Cootharaba.
Around the home:
May be found in damp or moist gardens under timber, sheets of iron & foraging amongst thick vegetation.

Give us a call today for fast removal of snakes and other reptiles. Call Now

We service all Sunshine Coast areas and surrounds! Richie and his team have been professionally relocating snakes for over 15 years. His team are the most professional, knowledgeable snake catchers in the industry. You’ll be in good hands!